Overview: What are nail disorders?

Nail disorders refer to changes in the appearance or condition of healthy nails, which are smooth and hard with an even colour. Irregularities such as white spots or vertical ridges on a nail’s surface are harmless.

Nails are hardened skin cells. As new skin cells grow under the cuticle, they push older cells forward, where the skin protein called keratin hardens into the visible nail. On average, fingernails grow at a rate of 2–3 mm per month and toenails grow 1 mm per month, but this can change for many reasons. Disease, changes in hormone levels, and aging can slow the growth rate.

In some cases, nail disorders are considered minor yet may require treatment as they can affect everyday tasks such as walking, holding objects, and fastening buttons. However, it is important to note that changes to nails may also signal significant damage to the nail and surrounding tissue, or a more serious underlying disease that requires a visit to the doctor. For example, a red nail bed can indicate the presence of an underlying heart condition, and thick yellow nails can signify lung disease. Generally, you should visit your doctor if you notice any of the following in your nails: changes in colour or shape, swollen skin or pain, white or black lines, or dents or ridges.

The information below focuses on three of the most common nail disorders: onychomycosis, paromychia and ingrown nails.

Onychomycosis is caused by fungi, most commonly dermatophytes and less commonly, yeast (Candida). The fungus usually invades the nail at the free edge and then spreads down the side toward the base. Less commonly, it starts from the base and moves upward. Infection may occur in patches or streaks on the nail surface.

Paronychia results when injury to the nail causes the nail to separate from the nail fold and allow the entry of bacteria, most commonly Staphylococcus aureus or Streptococcus species. A mixture of bacteria may be present, particularly in persons with diabetes. Greenish nails suggest Pseudomonas species infection. Chronic paronychia is caused mainly by yeast fungus (Candida).

Ingrown nails occur when the corners or sides of a nail curve and dig into the flesh and an inflammatory response ensues. Ingrown nails may be caused by: 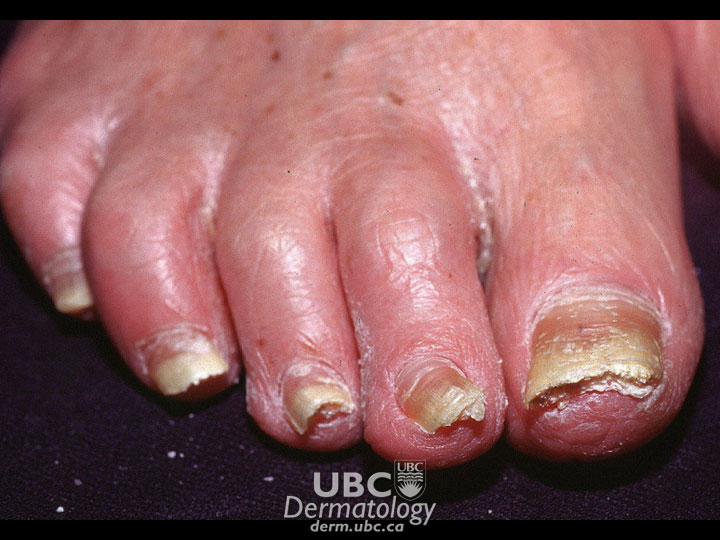